Do you know that show where four chefs are pitted against each other with a basket of ingredients that obviously do not mix well? The contestants are given impossible time limits to use those ingredients to create delicious appetizers, main courses and desserts. (I wanted to say edible, but that is not good enough for this show.) The judges “chop” one competitor each round until a winner is crowned with a $10,000 check.

That show has more heart than I do.

I’m here to confess that I chopped eight characters from my fantasy novel. No, I did not kill them. Their deaths could have served a purpose, to move the story along, to strike an emotional note, to give the plot meaning. Nope, I did not give theses characters that much dignity. I spent months creating these guardians, molding each carefully to give them separate personalities, inventing strengths, weaknesses, habits, mannerisms. I LOVE these characters. Yet, I coldly deleted them from existence.

You know, on those cop shows where the perp swears she did not kill the victim, because she loved him. Yea, I feel like that, except worse. They are not gone; they never existed.

But it was necessary. My rational brain repeats this fact over and over again, trying to communicate to my emotional brain who is not listening. I created eight guardians, two from each specialty school. I thought you could always use a back-up. As I wrote the scenes, I would sometimes forget to have a guardian act or say something. If I, who lovingly created these people, can’t remember they are in the scene, then those particular characters are obviously not necessary to the story. Still, I wrote more chapters trying to get the guardians more involved in the plot. That took too much away from my main protagonists.

Finally, by chapter 26, I realized half of the guardians had to go. Deciding which ones took another day of haggling with myself. Raidin is a bit cautious, outlining the dangers they might face, but Ial is silent and steady, creating a sense of stability and forethought. They’re both from the husbandry school. One has to go. I could probably use Kori from the medicinal school to fill in the fear factor. But then I’d have to get rid of Nyna who looked at everything with innocent eyes. This continued until I narrowed down my hit list. I cut four of Talia’s guardians and four of Tanin’s guardians (which was much easier because I had not fallen in love with them).

Mind you, during revision, I’m going to have to combine roles and remove the cut characters permanently from the ranks of my earlier chapters. I will not do that now. I will keep increasing my word count until I can hold a messy, full-of-inconsistencies, grammatically-incorrect manuscript in one hand and a red pen in the other. Nevertheless, I still morn the disappearance of some of my most beloved characters.

Have you painfully removed characters from your works?

The book I’m recommending today is more of a coffee table, I’m waiting for my lunch to come out of the microwave book. The Elements: A Visual Exploration of Every Known Atom in the Universe by Theodore Gray pleases the eyes while filling the mind with all kinds of possibilities. Everyone would appreciate chemistry more if they were introduced to the elements through this medium. The colorful and enticing pictures invite you to read the amusing text which tricks you into learning. With no more than a blurb, Gray manages to sum up the importance of each element along with its quirks and historical uses. Not a newbie to the world of chemistry, I still learned something about each element while continuously petting the book as the colors and textures drew me in. Gray has a book about molecules as well. I might have to get that one next. Thank you to my son for spotting this at a school book fair and purchasing it with his own money. Geekiness is apparently hereditary. 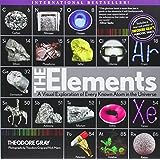